SDK Bridge set out to find out what is most important to the people who use APIs by sending out a survey and asking them. We found, not surprisingly, that many thought that documentation could be better. When asked to rate quantitatively, people rated overviews, sample code, and API references the highest, followed closely by tutorials. When asked for open-ended comments, a large percentage mentioned working sample code as helpful, and an equally high percentage mentioned how important it is that documentation be complete and accurate. Two other important factors that were mentioned by several respondents are (1) it is very helpful to explain why you would use something in addition to how you use it and (2) good overviews can really help when getting started with a technology.

Thirty six people respond to the survey. Half of them were either developers or architects, and other half were split between being project managers, managers, writers, and testers. 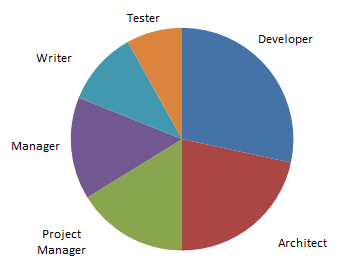 When asked what kinds of APIs they were working with, the largest group said Web APIs, which is an indication of just how fast the Web API industry is growing. Server and desktop SDKs were next, followed by a significantly-sized group working with mobile SDKs, and a small number working with SDKs for gaming consoles. 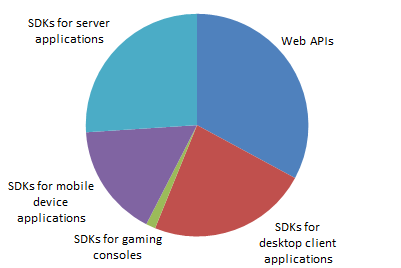 We asked people to rate the documentation that they are using. The answer came back pretty clearly as “fair”, with a few people responding “good” or “bad”. No one rated documentation as either “excellent” or “unusable”. 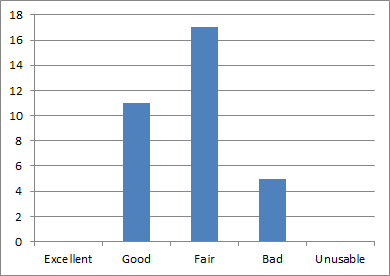 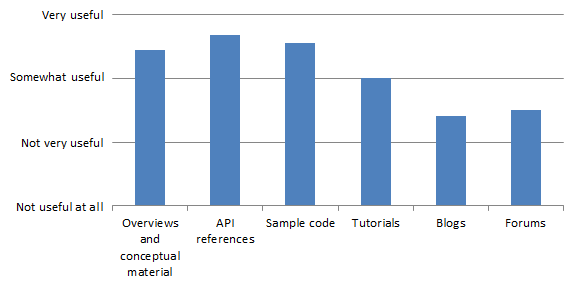 We broke down the data by roles to see if this had an effect on how these types were rated, but the effect was minor, as shown in the chart below. It appears that testers tend to find documentation less useful on the whole, with the exception of tutorials, which is not surprising. 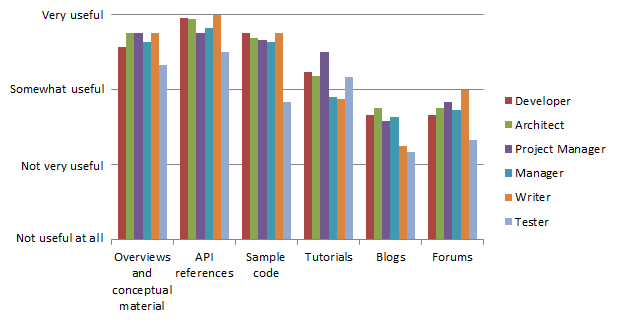 In addition, we broke down the data by types of APIs to see if this had an effect on how these documentation types were rated, but again, the effect was minor. 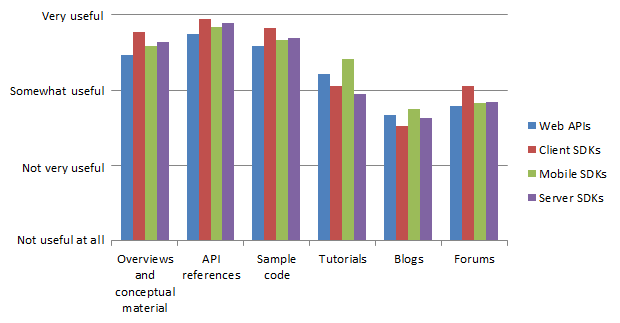 Sample Code (30% mentioned)
30% of the respondents mentioned sample code as important, especially working sample code. “The most useful API documentation I’ve seen shows the API calls with a working example to show the response and let me tweak it,” and “Examples are extremely helpful, especially working samples. There’s no substitute for actually seeing something work.” Examples should be clear and short, and they should “align to real-life expected use cases, not be contrived to simply show the syntax of what it looks like to call a function in a particular language.”

Completeness and Accuracy (30% mentioned)
Completeness and accuracy were themes in 30% of the responses. “It needs to be comprehensive, i.e., all the information has to be there. You need to be able to find the answers to specific questions when you have them.” Also: “The vast majority of API documentation I have seen does not completely describe the behavior and omits important details.” Mentioned as often missing are:

Usage (18% mentioned)
18% of the respondents mentioned that explaining how something works is not enough, and that you need to make sure that documentation explains why you would use it. “Providing examples of how the API can be used would be very helpful.” There appears to be a desire for usage scenarios for both the entire platform and for specific calls. One person summed it up this way: “Focus on the ‘why’.”

Getting Started with a Good Overview (15% mentioned)
Several people mentioned that the documentation requires a good overview that helps people get started. “It has to be presented in a logical order for beginners who start out not knowing anything.” Also: “Diving into details without an overview is not helpful.” Developers want to be able to start at a high level, but be able to easily get to the low level details. One person wanted a “clear, concise overview with drilldown to specifics and error codes,” and another said the documentation should be “presenting the complete picture across a technology such that a new user can drop in at the level they need: overview down to detailed reference.”

Other Helpful or Unhelpful Aspects
Other useful suggestions include:

Participants were asked for any other comments about API documentation. Some responses include:

The following conclusions can be drawn from the quantitative portion of the survey:

From the text-based part of the survey, we can conclude that sample code and completeness are clearly very important, followed by usage information so people understand why an API would be used and help getting started with good overview material. Sample code should actually be working code so that developers can start with it and build on it. Completeness means more than just descriptions of the various pieces of a method, property, or request; it means also describing the behavior, and especially the error conditions. Accuracy is also important, which is why the development team needs to set aside enough time for good technical reviews, something that can be difficult to accomplish.

If your budget is limited, it appears that the best place to put effort into is to create good, working sample code and making sure that your documentation covers everything that it should and that it is as accurate as possible. You can increase the adoption of your platform by including real-world usage examples and by making it easy for developers to get started through good overview material.